This is a recipe that would have been familiar to all Britons living and working in the Imperial Raj. Indeed the combination of Indian cooks, British tastes and exotic foods have made a lasting impression on British cuisine right down to the present day. New, strange and exciting ingredients would be used to try and recreate familiar, edible and nutritious meals befitting the ruling class that they had become. Lack of refrigeration, a hot and humid climate and unfamiliar cooking facilities would all conspire to make cooking an even more difficult prospect than it already would have been. However, the results of these intrepid culinary explorers could often be an interesting mix of East meets West. And very often create unforeseen varieties of dishes, courses and menus. 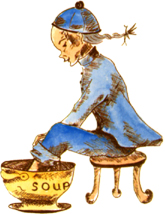